Last Sunday saw Keith Atkinson complete his quest of doing fifty million metres on the Concept 2 rowing machine. Keith started rowing in 1954 at The Nottingham Boat Club. He went to Durham University returning to the Boat Club after he graduated.

He served as Club captain in the 60s and became President in 1977 a position which he held until he retired in 2017.

In 1979 he started to row on the rowing machine mainly to keep fit and shortly after this was diagnosed with Multiple Sclerosis, however he continued to row on. During his journey he won two bronze medals in the over 65’s lightweight class at the World Indoor Rowing Championships held in America in 1999 and 2000. He set a target of completing fifty million metres by the time of the Tokyo Olympics and this he has done with months to spare.

Most mornings whilst the rest of the world is tucked up in bed at 5am Keith is on his machine grinding out another 10,000 metres. In the early days he would have done this in under 40 minutes but because of his MS it takes him and hour and forty minutes.

At the EGM held at the club last Wednesday saw Keith being presented with a trophy (picture attached) and receiving a minute’s applause. There was a special cake as well.

Club President Tony Lorrimer said “It is an incredible achievement and everyday when I thought I was catching him up I would discover, the next morning, that the gap was bigger.”

The final words go to Keith who said “For sale 1 rowing machine 50,000,000 metres on the clock one careful owner” 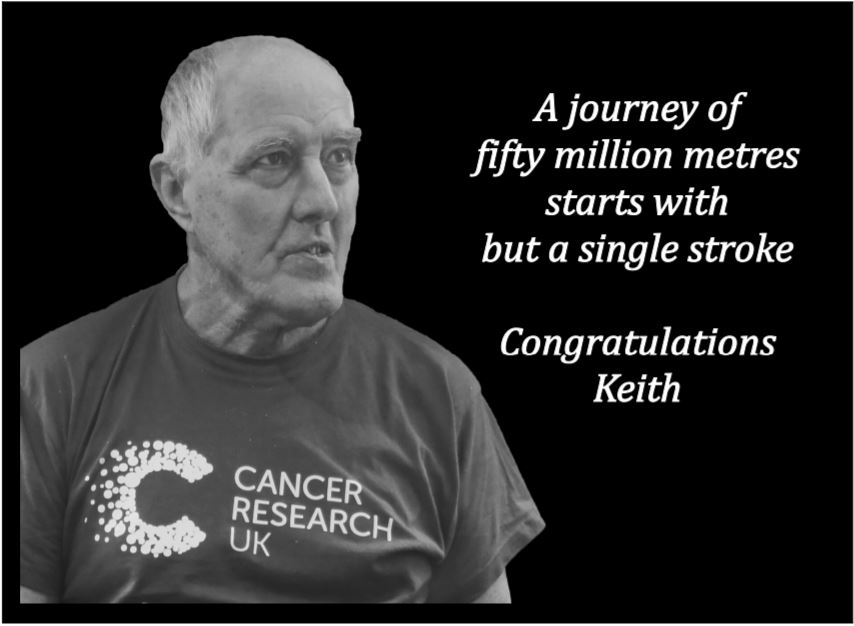 Another successful day on Trentside